When Is The Bird Nest Season? 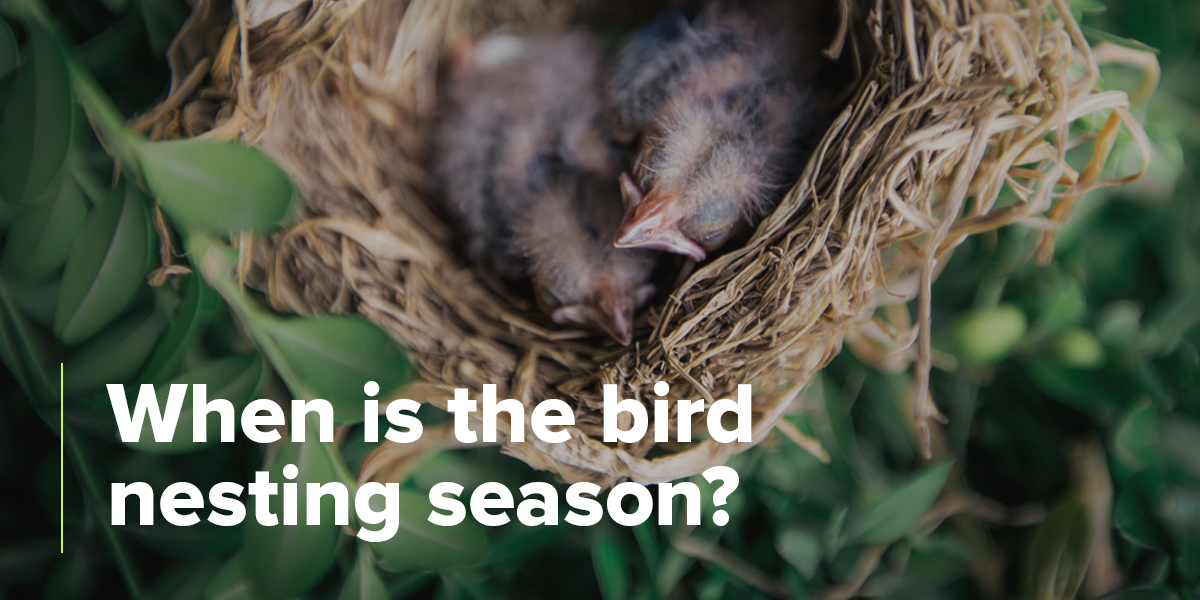 Bird nesting season differs in months according to the different species of bird. Sometimes, when the temperature is high, birds can be induced to build nests and lay their eggs. Climate change results in challenges for specific species who cannot keep up with the rate of change. However, the regular season for most birds to start nesting is when spring is in town. That is, according to Natural England, the nesting season for birds in the UK is within February and August.

The workforce is typically needed for nesting season to clear the trees or vegetation before birds can proceed. The law of birds nesting season requires that a pre-work survey be conducted by professional contractors. Overall, birds need assistance when they want to start or stop nesting. In the UK, it is our job to evaluate, record and confirm the human effect on trees and forests to ensure that nesting birds face no challenge in the season.

It is essential that birds breed and they always choose a season for their breeding process. Most times, wild birds start making their debut nest and seek a partner to share with them. By that time, birds will begin to mark territory, collect nesting materials such as branches, moss, wool etc. and place it at the place of a nest. However, in most cases, the first nesting trial is meant to attract a potential partner to share a nest.

For Tree Surgeon Essex – Call us

Cutting trees and hedges or site clearance is advisable before the birds nesting season. Nevertheless, due to the various species of bird nesting seasons, it is often difficult to keep up. In some cases, the nesting season may begin before or extend beyond the period of site clearance. As contractors, we avoid negatively affecting birds nesting and any violation of the several laws guiding the season. It is a delicate process because it determines the security of the birds and their eggs.

Ordinary tree cutters often skip ground vegetation during deforestation, and consequently, ground-nesting birds. With professional contractors, you enjoy additional care and monitoring to prevent damage to a nesting site or discomfort for birds. Furthermore, it is also applicable to retained trees at the site. Tree felling is also a part of the preparations for birds nesting season. Removing adjacent trees can lead to the abandonment of the established nest, and exposures to elements. This action against birds nesting also constitutes a violation of the law and could lead to prosecution.

As contractors, we can perform our jobs better if the client is amiable. To have a cordial relationship, it is recommended that the client be aware of the legal requirements for birds nesting. With that knowledge, violating any birds nesting season law is impossible. Other times, tree cutting and other preparations have to be put on hold because birds nesting season came early. It is vital that clients understand and be patient until after birds finish nesting.

What Is The Reason For Nesting Early?

Nesting early in the season is not entirely a bad thing for most birds. Breeding at the start of the season means the birds use resources to a great extent before others. Usually, when birds start nesting in the same season, there will be a need to struggle for supplies. “Shopping” for nesting supplies before other birds is likely the most compelling advantage of nesting early.

However, that prospect has been shot down by the recent findings from a BTO national study. The research revealed that a variety of species including birds now have a breeding season of 1 to 31 days earlier than in the 1960s. The conclusion is that the early birds are in danger of starving.

This shift is driven by climate change and affects a variety of animals in various ways. One of the side effects is that the ecosystem will become unbalanced. The hatched chicks are ready to feast. Meanwhile, their food (insects) are scarce to find. Nevertheless, for some species of birds, nesting early in the season is a natural phenomenon for them. Examples of those birds are:

The Factors That Affect birds Nesting Season In UK

In the UK, the perfect season for birds nesting is in the spring. During this season, birds display exclusive breeding habits like territorialism, singing, and hunting for nest sites. When birds in the UK nest is no longer a debate. However, the factors that affect bird nesting season in the UK is yet to be discussed.

Firstly, the conditions in the environment typically cause an alteration in the hormonal system of birds. Photoperiod, day length, is one of the factors that have a significant influence on birds breeding behaviour during their season. Lengthier days are usually in favour of the diurnal birds, that is, birds that function more in daylight hours.

Secondly, as in most cases, the diversity of temperature is also a major factor to consider. When the weather is mild in the UK during birds nesting season, it means an abundance of food. The available foods are mostly fresh buds and insects. Another plus is that the days will remain long, which is suitable for diurnal birds.

Thirdly, in the case whereby birds undergo early or late breeding outside the usual season, then the factors change. During the period, the weather will possibly be harsh while the day length will decrease. Perhaps, this alteration will result in birds thriving on different types of food, depending on the condition and temperature.