Wisteria Pruning: When & How to Prune Wisteria 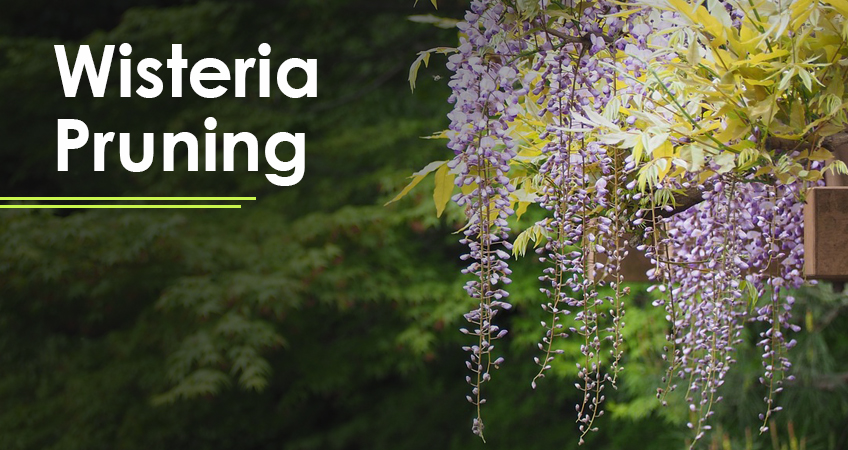 Brimming in spring, and in such confidence, the Wisteria plant is one happy vine that thrives. With its colourful clusters of blue, purple to lilac flowers, the plant gets a rewarding love from everyone, especially gardeners.

A vicious grower, it’s easy for the perennial plant to work its way into all spaces. That is its way of spreading its wings after all.

If you’re not living in China, Japan, Eastern United States, or Korea; then the fragrant, high-climbing plant should not constitute a problem. On the other hand, if this beautiful flower appears in your garden, here’s what you should know about pruning the invasive Wisteria plant.

When to Prune Wisteria?

A Wisteria plant should be pruned only twice a year: in summer, and then again in winter. Pruning keeps the growth of the sprawling Wisteria under control, and just in check, to beautify the setting. However, that’s not all.
Pruning spurs the young branches to grow, and bring forth buds. That way, there’s a good circulation of air, sunlight and improved chances of ripening. Hence, the importance of it.

How to Prune Wisteria?

In winter, prepare to prune when it’s near the end of the season. It would be easier at that time, since the flowers have not recovered from the fall season, and would be quicker to reach.

Remove the green, long stems; cutting them short to about two or three flower buds. Rather than having green, vegetative growth, this would foster the growth of more flower buds.

In summer, it’s almost the same, except that you’re cutting off five or six leaves per shoot.

Older plants tend to be more robust and rigid than a little wisteria plant that’s just starting its journey, for example. That’s where hard pruning comes in. Hard pruning is more severe and requires an enormous amount of effort.

Rather than indulge with a pair of scissors, you’d need to switch to a pruning saw or a great couple of loppers to achieve this task.

Move your hands towards long branches, focusing on older stems just over the young branches. Branch out a few inches before them and cut those out. Be careful, though, so you do not affect the young stems that are soon to bloom.

Yes, Wisteria grows wild, but it doesn’t mean that the plant cannot be tamed. When trained, Wisteria becomes more enjoyable rather than being left all by itself.

On pergolas, arbours and arches; Wisterias make the best impact where they dangle free, making the ‘grand’ appearance.

On walls or wires, they extend even more beautifully. The result is a floral design that’s just as magnificent as those we see in royal houses.

Cover them over arched pathways, or garden benches, and you will have found the perfect spot to propose to your lover.

Whatever method you decide on, ensure that the structure is sturdy enough to accommodate the vine. Also, avoid planting it close to the house, or you’d be surprised to see its branch creeping in through the kitchen window. You wouldn’t want that to happen, especially since the Wisteria is a permanent arrangement.

Other ways to train your Wisteria

On walls – the best way to train a wisteria is on walls as an espalier, with wires over time and with pruning twice a year the plants will grow strongly up a wall. Using new growths that develop at the base as replacement shoots.

On pergolas and arches – Due to the long flower racemes they are best admired on taller structures. However they can get tangled therefore for the best flowers reduce the amount of racemes by thinning them out and giving them space to develop.

On trees – Even wisterias can be trained to grow up trees however growing of wisterias on trees can make pruning difficult, if you choose to grow a wisteria into a tree make sue it is on the south side away from the trunk.

Getting your Wisteria to blossom

Wisterias are known to be tardy when blooming. Without having that consideration, most gardeners tend to worry at the start of the planting season. If you’re one, that should be at the end of your list. Here’s what you should think about instead.

Avoid purchasing Wisteria grown from seeds. Seed-grown wisteria plants are usually immature, and stay that way over extended periods. This implies that the seed may take over ten years before it reaches the prime of its years. Instead, buy varieties. The ones cut from the plant itself are more reliable sources to consider if your plant must bloom.

Overwatering could be the second factor. After planting, avoid watering the plant regularly and at certain seasons. If it’s winter, you don’t need to do so much work.

Wisteria is not of a big fan of fertilisers, so you should avoid those too. Fertilisers are not the only causes of your plant not blooming. Other reasons could be inappropriate pruning, frost exposure to the buds, or a lack of sunlight, that will all prevent the Wisteria from blooming.

Though beautiful, Wisteria has its pros and cons. It’s essential to be well-informed before investing in or planting it. Regardless of its drawbacks, enjoy the magical, floral setting this plant brings.