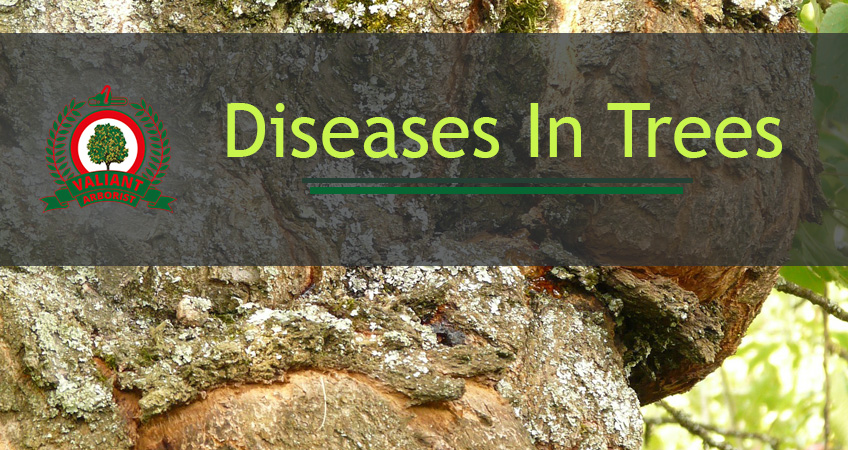 Trees are vulnerable to diseases like every other living organism. Trees require a sufficient supply of carbon dioxide, water, light and other nutrients from their environment for growth and development. An inadequacy of any of these nutrients may reduce growth and stress out the trees.

Where a tree becomes stressed, it may lack the energy needed to produce essential defences and may become prone to diseases. Diseased trees eventually die, and it is quite tricky diagnosing the initial cause. This difficulty arises from the complexity of problems that may not be easily traced.

For instance, drought may cause a tree to weaken and then make it susceptible to fungal attack. Also, environmental factors like storm wounds, pollution or temperature can affect the tree. Other times, two or more diseases may be accumulated in the tree. Diseases in trees are derived from fungi, viral or bacterial sources.

Fit and healthy trees in the UK do not often have trouble with fungus. A tree that is stressed because of bark injury, drought or broken branches may easily get fungal decay. Many kinds of fungi survive on dead trees. The growth of mushroom can be reduced by applying a suitable fungicide. Knowing the specific fungicide to use can only be possible when you identify the tree fungus.

The major types of fungal decay are white rots and brown rots. White rots affect all the parts of the tree, making it into a spongy mass that is pale. Honey fungus, known as Armillaria spp., is an excellent example of a white rot fungus which causes the butts and roots of UK trees to rot.

The honey fungus grows in small clumps and tufts on the wood of trees. The colour of its cap is yellowish-brown, and whenever it is moist, its touch is sticky. They have a variety of shape from conical to convex with a space in the middle. This space is dependent on how old the fungus is. The trees either have rings on their stems or not, but they usually have spore prints in white.

On the other hand, brown rots attack the hemicellulose and cellulose in wood, exempting the lignin only. The diseased wood turns brown and cracks in the form of a brick. The timber value of the tree reduces and may make it unstable and brittle. Examples of brown rots are beefsteak fungus and tinder fungus.

Beefsteak fungus has a tongue-like look and a reddish-brown colour, together with a roughened surface. Its underside has a creamy-white colour and constitutes of minute pores. When cut open, it produces a dull looking red juice, and its flesh looks meaty. This type of fungus is common on oaks and sweet chestnut, and typically seen in August.

Tinder fungus also referred to a horse’s hoof fungus, is usually found on beech and birch trees. It may be used in fighting fires, as it can smoke for several hours. This particular kind of fungi is resilient and hard. They can remain alive for a very long time. They can also develop different colours of rings and circles.

The above illustrations are to help you identify tree fungus, although, there are various other kinds of fungus likely to attack your trees if precautions are not taken. Consult a professional arborist such as Valiant Arborist whenever you suspect something wrong about your trees or plants.

Benefits of Fungi in Trees

Most times, a fungal disease can only be detected when the fruiting body of the mushrooms is physically apparent. By this time, it may be already late to take action. However, it is expedient to understand that not all types of fungi can pose damage to trees.

Some kinds of fungi have a relationship that is mutually beneficial with the trees (symbiotic). This is where the fungi obtain energy from tree sugars. These tree sugars are made during the process of photosynthesis. Then the tree derives its benefit from the absorption of extra phosphorus and nitrogen due to the soil’s final action.

Treatment of Fungi in Trees

It is unfortunate that diseased trees due to fungal decay cannot be cured or treated. Hence, as an essential aspect of gardening, prevention of the fungus from developing is necessary. The perfect defence against the development of mushroom is the maintenance of healthy trees.

To maintain healthy trees, there is a need for you to select proper sites for the trees’ growth. Moreover, you need the application of fertilizer at regular periods and the regulation of the supply of a quantity of water, especially during rainy seasons. There are lots of fungicides available in the UK, but they only assist in the prevention of fungi growth in trees.

Many types of bacteria may also lead to tree diseases in the UK. Oak decline is a known syndrome or complex disorder whereby bacteria come together with other destructive agents like insect infestation and weather damage.

These elements communicate to form a critical decline in the condition of trees. The two kinds of decrease associated with bacterial infections are: chronic and acute.

The continuous decline of the oak can take several years before finally killing the tree. Early signs include the deterioration of the tree foliage; the leaves become smaller than usual, yellowish or pale. Sometimes the foliage can be sparse all around the crown. Then the branches and twigs die.

The severe decline of the oak in diseased trees affects the mature oaks. The bacteria leads to signs of stem bleeding and dark; sticky moisture emits from cracks in the trunk of the tree. Both of UK’s native species, that is, sessile and pedunculate oaks are affected when the tree is diseased.

The sudden death of oak has led to extensive damage of trees in areas of the USA, Europe and in the UK. However, it seems as though the native oaks of UK trees are not as prone to diseases as that of America.

Non-native oak species such as Rhododendron serves as host to the fungus pathogen, Phytophthora ramorum. This, in turn, has been confirmed as a causal agent in the sudden death of oaks.

Until 2009 in the UK, the organism affected just a few trees. After that, it was discovered to be infesting and killing Japanese larch trees in large numbers in Southwestern parts of England. This behavioural change of the pathogen was experienced in the world for the first time. It had affected large quantities of conifer tree species.

Red band needle blight is a tree disease in the UK which leads to needle defoliation that, in extreme cases, kills trees. For the past twenty years, the emergence of this tree disease has increased drastically in the UK. The increase may be accounted to the rise in rainfall during summer and spring, and warm spring temperatures. This encourages spore infection and dispersal. Climate change can increase the outbreak of this tree disease where warming trends persist.

Ash dieback is a significant disease relating to ash trees, caused by a tree fungus known as Chalara fraxinea. This disease leads to stem lesions, crown dieback and leaf loss in the affected tree and may even lead to the death of the tree.

Chalara fraxinea was confirmed in 2012 in the UK when it became discovered in young trees that were imported to a nursery at Buckinghamshire. Since then, the fungus has been seen at many sites that received stocks of young ash trees in the last five years.

In October of that year, scientists realised numbers of old ash trees which were not in connection with the nursery stocks, in the Eastern parts of Anglia. An emergency examination was done across the countryside, and some infected trees were seen in the counties.

Forest scientists are now sure natural causes are spreading the ash dieback disease. For example, the wind carries spores. Chalara fraxinea is treated under national measures as a quarantine tree pest.

It is advisable to take preventive measures against diseases likely to attack your trees in a reasonable time. This will help keep your tree sustainable and fruitful.

Just as you take cognisance of your body and environmental hygiene, your trees also require good health to survive. Biosecurity is vital to the prevention of the spread of tree diseases.

Furthermore, you should always disinfect and clean tools, footwear, and vehicles during movement between sites. As regards ash trees that have been planted for about five years, frequently inspect them to ensure that they are free from any disease.

Maintenance of a good surrounding that is free of dead branches and leaves should be a priority so that fungi will not have the opportunity to grow. And, if you need more information on tree diseases in the UK, tree fungus and how to identify tree fungus, Valiant Arborist is available to put you through.